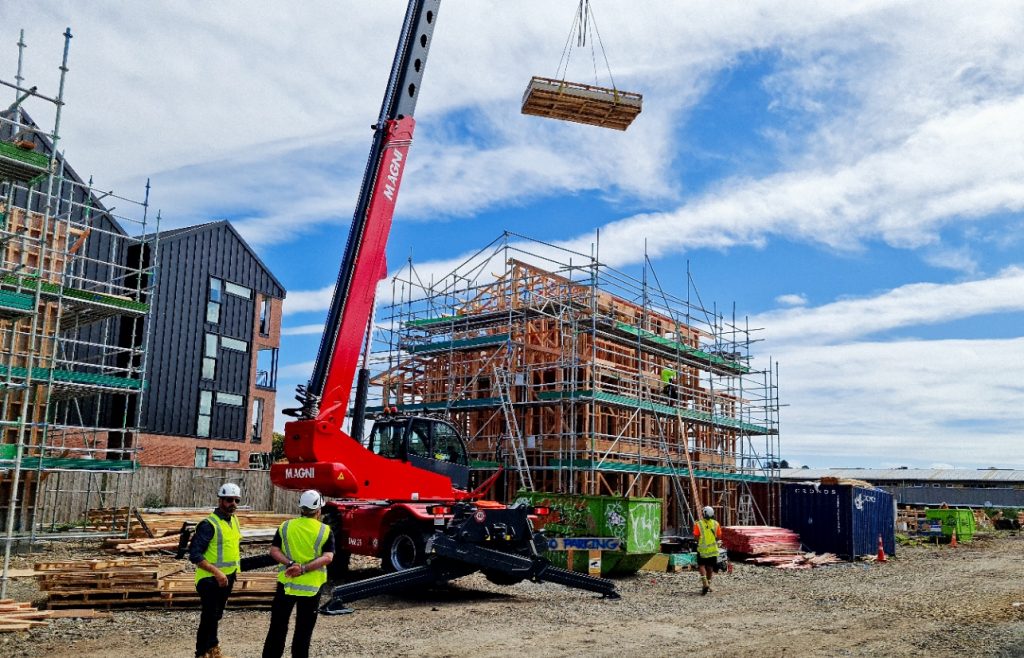 The days of needing on site a mobile crane, a boom lift or other types of elevated work platforms, a forklift and an excavator are numbered – one machine can do it all.

Rotating telehandlers may look a lot like their conventional cousins, but they are very different.

Their arrival on New Zealand work sites has completely changed the way project management is planned and the way on-site work is completed in a safer and faster manner.

They load material, pick it up, drive to where it’s needed and then unload. The rotating telehandler can then pick the load, rotate and place the materials where needed.

The concept originated in Europe, where the majority of urban construction sites are very compact and do not allow room for traditional telehandlers.

“Rotating telehandlers have taken North America by storm and over the past 18 months have been attracting a lot of attention in New Zealand,” says APS general manager Darren Boon, agents for Magni, one of the most technologically advanced brands of rotating telehandlers in the world.

“As technology has improved so has the reach and lifting capacity of these type of machines. On a multi-level construction site, a machine with a five-tonne lift and 26-metre reach would usually have been the standard,” says Boon.

“Now machines are available for bigger projects with heavy lift capability up to 13 tonnes and machines with a reach of 51 metres.”

APS have supplied a number of machines across New Zealand including a rotating machine to Ports of Auckland and New Zealand’s largest telehandler, a massive Magni HTH24.11 (24-tonne lift) machine to Ghella Abergeldie Joint Venture which is working on the Watercare Main Central Interceptor tunnel project in Auckland.

‘This kind of versality and safety is exactly what I have been looking for’ is a rejoinder that Boon is getting on a regular basis.

“Magni recognised early that the biggest trend in the industry is the desire by end users to lift safer, higher and heavier and, as a result, Magni has become the industry leader in all of these categories,” he says.

Magni rotating telehandlers are one of the safest machines to operate on the worksite. Self-levelling stabiliser legs combined with attachment recognition and on-board diagnostics show the position of the load in real time.

“Rotating telehandlers act like cranes in that they have a cab that continuously spins 360°, enabling the unique pick-and-place capability that is the hallmark of this class of equipment.

“Without a need to drive the materials, a rotating telehandler reduces load transport times and increases productivity,” he says.

Rotating telehandlers are also a solution for compact jobsites, where their greater lift heights and reach can place many of the jobsite materials without the need to reposition the machine.

As well as being the New Zealand distributor for Magni telehandlers, APS Equipment has a fleet of 20 hire telehandlers from 2.5-ton lift to 12-ton lift and eight to 20 metre reach. These machines are available for short- or long-term hire throughout the country.