Employers and workers alike should take heed of a landmark Australian study that graphically illustrates the alarming scale of asthma in today’s workplaces. 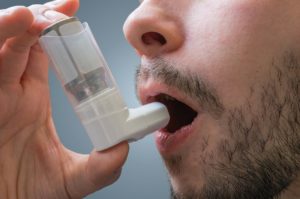 Asthma is responsible for some 69,000 hospital admissions and 67 deaths per year, making it the third leading cause of death in New Zealand.

Recent Australian research shows 47 percent of male and 40 percent of female workers were exposed to one or more asthmagens (agents that cause asthma) in their workplace.

The extended Australian Work Exposure Study that ran from 2013-2014 examined the types of work and workers most likely to be exposed to asthmagens in their workplace.

The study also found that workers could be exposed to more than one asthmagen depending on the types of tasks undertaken at work.

“Farmers and animal workers are most likely to be exposed to asthmagens,” explains Safe Work Australia director of research and evaluation Dr Fleur de Crespigny.

However, de Crespigny adds that “it’s important to note” that while most workers will not develop asthma as a result of work-related exposures, those exposed to asthmagens are at greater risk. “It is also possible that the rate of new cases of occupational asthma and work-aggravated asthma could be reduced if the information from this research is used to focus preventative efforts.”

Work-related asthma includes new cases of asthma caused by exposures to asthmagens at work (occupational asthma) and cases where asthma symptoms are made worse or experienced more often by exposures to triggers (normally irritants) at work (work-aggravated asthma).

A review of international studies estimated about 16 to 17 percent of adult onset asthma cases were caused by workplace exposures to asthmagens.

Occupational asthma can be classified as either:

·          sensitiser-induced (allergic) characterised by exposure(s) to an agent that sensitises the airways so they react to subsequent exposures to the same agent, to other sensitisers, and to non-specific triggers and or

·          irritant-induced (non-allergic) typically occurs as a result of one or more high level exposures to an irritant accounts for approximately 10 percent of all occupational asthma.

Occupational asthma can be prevented. For example, a study of workers in the Australian and New Zealand aluminium industry ascribed improvements in control of exposures, respiratory protection and pre-placement medical assessments to a 96 per cent reduction in the incidence of occupational asthma in seven smelters between 1992 and 2006.

However, prior to the AWES-2 research there was little information available on the extent of exposures to these asthmagens in Australia that was useful for prioritising potential work health and safety interventions.

A total of 4878 participants from a randomly selected population-based sample of Australian workers were interviewed and asked questions about their tasks at work, including the types of materials worked with, work practices and the controls used to prevent or minimise exposures.

An automated expert assessment process was then used to estimate potential exposures to a predefined list of asthmagens based on worker responses to one of 52 job-specific modules or, in some cases, a generic module within the web-based tool OccIDEAS.

Careful analysis of the results found that workers could be exposed to more than one asthmagen depending on the tasks undertaken and the materials, work practices and controls used.

The results were generally reported by gender due to different profiles of occupation and exposures:

·          the most common asthmagens that male workers in the sample were probably exposed to were bio-aerosols, which includes moulds commonly found in rotting food and metal working fluids potentially contaminated with bacteria (26 per cent), metals and metal compounds (23 per cent), arthropods or mites (21 per cent) and latex (19 per cent). Four per cent of male workers were exposed to isocyanates

·          forty percent of all females in the sample were probably exposed to one or more asthmagens, with probable exposures most common among farmers and animal workers (100 per cent), carers (99 percent), cleaners (96 per cent), food preparation workers (96 per cent) and nurses (92 percent)

·          the most common asthmagens that female workers in the sample were probably exposed to were latex (25 percent), industrial cleaning and sterilising agents (20 percent), bio-aerosols (18 per cent) and arthropods or mites (16 percent)

·          generally, probable exposures were more common to high molecular weight (HMW) agents such as bio-aerosols and athropods and mites

·          relationships between probable exposures to all asthmagens within occupational groups were also examined and these analyses were provided in supplementary materials to the research paper.

The AWES-2 study dovetails with other research findings such as the European Community Respiratory Health Survey (ECRHS), which found about 26 percent of the sample self-reported exposures to ‘vapours, gas, dust or fumes’ in their current job.

However, this study did not identify specific asthmagens, not all dusts are asthmagenic, and by definition it did not include a wide range of agents included in AWES–2 such as latex, animals and animal products and foods.

A Norwegian study also assessed exposures to asthmagens using a job-exposure matrix and found 62 percent of males and 59 percent of females were exposed at some time over the previous 10 years to biological dusts, mineral dusts, gases, or fumes.

A South Korean study that used information from a range of sources, including physicians, surveillance systems and compensation schemes, found common asthmagens to be isocyanates, flour and grains, metals and metal compounds, reactive dye and solvents.