Two University of Canterbury earthquake engineers have been honoured at an American convention for the world-class excellence of their post-quake research assessing liquefaction hazards in Christchurch. 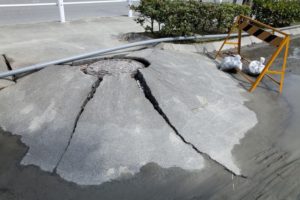 The academics were selected by the Society’s Awards Committee to receive the 2016 Norman Medal for their paper, ‘Evaluation of the Liquefaction Potential Index for Assessing Liquefaction Hazard in Christchurch, New Zealand,’ published in the Journal of Geotechnical and Geoenvironmental Engineering (JGGE), July 2014.

The UC academics were delighted to be recognised by the international society of their peers.

“We are delighted to receive this very prestigious award, which is yet another recognition of the outstanding quality of the UC research on the Christchurch earthquakes. We are particularly pleased that it was the highlight of a strong collaboration with our American colleagues, and our third major award in the US for published research papers on the Canterbury earthquakes,” Professor Cubrinovski says.

“This is a huge deal, as our paper was first evaluated by the specific journal in which it was published (JGGE) to be awarded the ‘best paper in JGGE’ for the year. This then meant that it was short-listed with the other 38 ‘best paper’ publications in the other journals that ASCE administers, and then it was decided by another panel that it was the best of these papers,” Professor Bradley says.

The paper stems from Maurer’s doctoral research and highlights the fruitful and ongoing collaboration among the authors on the 2010-2011 Canterbury, New Zealand, earthquake sequence, which has been funded by the New Zealand Earthquake Commission (EQC), National Science Foundation (NSF), US Geological Survey (USGS), University of Canterbury and Virginia Tech (VT).