Contending with difficult terrain, extreme weather conditions and unfriendly dogs is all in a day’s work for the hardworking team at King Country Energy. 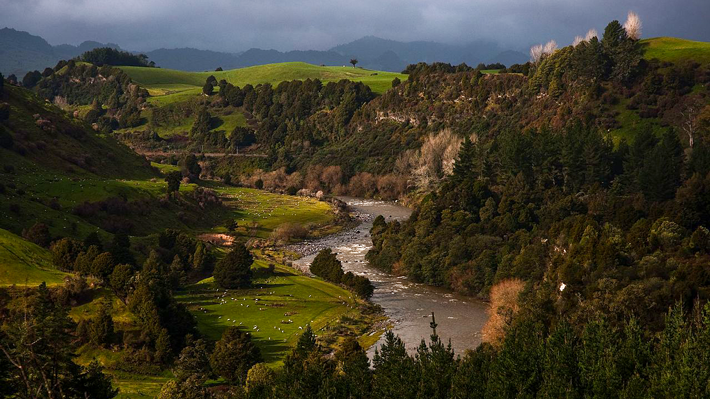 The company employs 48 people, including a team of specially-trained dedicated meter readers.

The five full-time and five part-time meter readers clock up more than 250,000km each year to reach the company’s residential, commercial and farming customers.

With meters located as far afield as Mt Ruapehu, the safety of its meter readers is a top priority for the company.

Usually working alone and sometimes in isolated and challenging locations – including a couple that can only be accessed by helicopter – the KCE team face some unique risks.

With locations including steep terrain in the hill country or dairy sheds with no cellphone reception, the company’s priority was to ensure the risk to its workers was properly understood and managed, and workers were well-trained and supported if things went wrong.

Kicking off in early 2016, KCE embarked on an extensive consultation process with its staff.

The company spent five months collecting and recording hazard information from the team, dedicating four full-day sessions to planning how to eliminate and control the risks they had identified.

A total of 38 hazards were identified and each given a score using a risk estimator tool.

Policies were put in place to manage these risks and KCE has committed to an annual review of its hazard register.

“We had hazard and risk registers in place but they needed to be a lot more in depth as to what those risks were and how we were going to manage them,” KCE Business Support and Compliance Manager Sande Jansen says.

“We really wanted to get the team involved in the decision-making process, this gave them some ownership in providing resolutions for controlling hazards and risks that they are faced with.”

Going the extra mile was key to getting buy-in from the team and is now a big part of the company’s approach to health and safety, Jansen adds.

“We now have a regular ongoing review of the hazard register with the meter readers where we talk about what are the lessons we’ve learnt and what have we put in place.”

As a result of this work, KCE has also updated its induction processes, which now includes a buddy system and a follow up review of hazards after three months on the job.

The team now also has regular health and safety meetings where solutions and initiatives are discussed.

KCE has also added several new training courses for its meter readers which include a dangerous dog handling course and advanced driver training.

The company has also invested in an intelligent GPS tracking system, SOS buttons and reversing cameras for their fleet of vehicles.

The feedback from staff has been “overwhelmingly positive”, with a rise in proactive reporting, Sande says.

“Four years ago, the meter readers would not necessarily have reported the minor incidents.

“Now they are really good at reporting the small things.

“All the training we’ve put in has really paid off as the staff now have a better understanding as to why the smallest incident needs to be reported.

“For us it’s fantastic – we welcome the reporting because it gives us more opportunity to learn what hazards the team are faced with and how to prevent reoccurrences.”

The renewed focus on health and safety is already proving worthwhile, with staff putting into practice the training they have received.

This was demonstrated when one meter reader became trapped by an aggressive cow in a woolshed, Jansen says.

“She activated her panic button and we were able to respond immediately.

“This allowed us to then complete a site assessment and update our meter notes for future reads so that other meter readers became aware of this risk, not just at this particular property, but alerting them to the potential of the incident occurring at other sites.”

At the end of the day, the success of the Meter Reader initiative was largely down to the staff themselves, Jansen insists.

“We’re very proud of our staff.

“Our health and safety success is a true credit to their commitment and how dedicated they are at keeping themselves and those around them safe.”