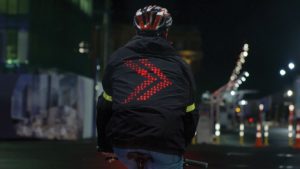 The Smart Jacket connects to the cyclist’s smartphone via an app that has been pre-programmed with the desired travel route.

The jacket then picks up route information, and communicates directions to the cyclist and surrounding traffic.

As the cyclist approaches an intersection or street crossing, a patch of lights on Smart Jacket’s sleeves light up to indicate to the cyclist which way they need to turn.

In addition, more than 300 built-in LED lights display illuminated arrows on the back of the jacket, informing other road users of the cyclist’s next move.

New Zealand Ministry of Transport data shows cyclists have a high risk of having a crash after dark, especially during peak time traffic flows in the morning between 8-10am and the early evening (4-6pm).

Sarah Walker says concepts like Smart Jacket could boost road safety for cyclists. “There’s a lot happening to improve road and cycle safety and encourage people to ride more, and I think the Smart Jacket is a great idea to add to the mix,” she believes. “There is this perceived idea that cycling is dangerous – so anything that can help take away those barriers is a good thing.”

The Smart Jacket prototype is a collaboration between Vodafone Netherlands and technology company Magic Bullet.

First developed in the Netherlands to improve safety for cyclists on their narrow roads, the jacket was of interest to Vodafone New Zealand as cycle safety continues to be a major focus as New Zealand’s cycling culture evolves.

“Technology is changing everything – from the way we educate our children, to how we manage our health and wellbeing,” he observes.

“The potential to connect things for good is limitless, and Smart Jacket is a great example of what’s possible in a world where everything is connected.”

Comedian and cycling advocate Jon Bridges adds that anything that boosts safety and improves communication between cars and bikes is a good thing.

“If we could ease that perception that cycling is dangerous then we will all be better off, and one good way is to have things that make it safer – like cool fun jackets that hook up to your phone,” he says.

“It is exciting to know that innovations like the Smart Jacket could soon become a part of our daily lives.”