Under the digital billboard headline ‘Cannabis is medicine’ the campaign features eight Kiwis who are a cross-section of patients, advocates, entrepreneurs and parents 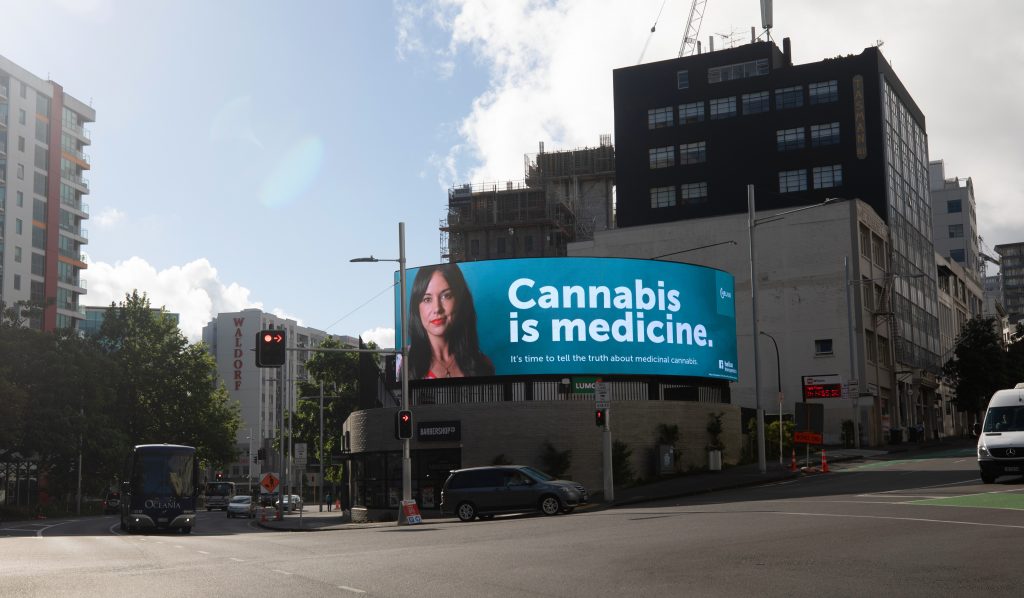 Behind the promotion is licensed New Zealand-owned cannabis company Helius Therapeutics. The campaign follows hard on the heels of the acceptance of cannabis related legislation in Parliament last week.

“Medicinal cannabis is not about people getting high. It’s about people feeling healthier. And we’re hoping our campaign will be a conversation-starter over the holidays,” says Executive Director Paul Manning,

“The campaign is designed to shine a light on cannabis as a medicine, encourage education and awareness and show that it is supported by people of all walks of life, with whom New Zealanders can relate.

“These are eight New Zealanders who passionately support medicinal cannabis and they each have their own story to tell. The truth is, it will be everyday people who use medicinal cannabis, which will soon become a very mainstream product.

“Our current focus is on research and developing cannabis therapeutics. We have no products to sell right now, but it is our responsibility to use the resources we have to provide education.

“Cannabis needs a rebrand. Despite over 80 percent of Kiwis supporting widespread access to cannabis for medicinal purposes, we still have a job to do when it comes to addressing stigma,” says Manning.

The campaign officially launched 16 December with the switching on of central Auckland’s largest digital billboard on the corner of Anzac Ave and Beach Rd, along with many other sites across the country.

The Misuse of Drugs (Medicinal Cannabis) Amendment Bill sets out the way for the creation of a medicinal cannabis scheme that will allow New Zealand companies like Helius to manufacture medicinal cannabis products for both the local and international markets.

Regulations, licensing rules and quality standards will be set on expert advice within a year. The company’s licensed ‘New Zealand Grown’ medicinal cannabis products are expected to be available to patients by 2020.

With the country’s regulatory environment changing, Helius is now moving ahead to research and develop new cannabis-based therapeutics.

“The voices of mainstream New Zealanders will again need to be heard in the New Year with the Ministry of Health set to release a consultation paper, asking for public input on the design of the medicinal cannabis regulations.

“Just like the passionate Kiwis in our campaign, we will again need people to have their say in the coming months on the pending regulations and scheme for medicinal cannabis. The bill may have passed but the process is by no means over, with the manual now to be written,” he says.

“This campaign honours those New Zealanders who have been prepared to stand up for medicinal cannabis access. These people, and thousands of others, are courageous enough to share their stories.

The eight Kiwis in Helius’ campaign are:

Katy Thomas – a blogger behind WellFitMum, TV presenter and influencer whose son has severe epilepsy

Emmelene Pryce – a mother whose child suffers from epilepsy