The Athena 850 scissor lift has received the Safety Solution of the Year at this year’s Manufacturers’ Monthly Endeavour Awards.

The awards recognise the safest, most efficient and innovative technologies and solutions in the manufacturing industry.

The bi-levelling compact tracked scissor lift can safely traverse slopes and terrain where access equipment previously could not operate at all. 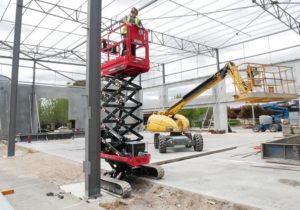 It is believed to be the first scissor lift in the world with the unique capability to level on its axis in longitudinal and lateral directions, allowing it to operate on slopes and undulating terrain where conventional scissor lifts cannot operate.

Conventional scissor lifts are typically limited to slight inclines of 2-4 degrees, whereas the Athena 850 scissor lift handles with assurance and safety, terrain variations up to 50cm front and back and 38cm side-to-side on uneven terrain, or inclines up to 20 degrees, says United Forklift and Access Solutions’ General Manager, Sales, Marketing and Distribution, Trent Osborne.

Marketed under the headline ‘the only one of its kind in the universe,’ the compact and versatile Athena 850’s outstanding design and performance won both the international (IAPA) and Australian New Product of the Year awards (HRIA) for 2016.

With a minimum operating width of 1300mm, basket capacity of 250 kg and a maximum working height of 7.9m, the machine is ideally suited to uses including facilities maintenance, park and tree management, council operations, building and construction, industrial and commercial plant access, tradespeople, landscapers, painters, electricians, orchardists and primary production including vineyards, horticulture and agriculture.

“Tracked scissor lifts already existed before the Athena, but what makes this machine unique is its bi-levelling technology, which is found only on the Athena,” Osborne adds.

“The Athena is built tough for indoor and outdoor work, where its design and functional superiority removes limitations inherent in conventional mobile scissor lifts.

“This greatly extends the machine’s safety versatility and value in the workplace.

Safety, versatility and workplace efficiency features of the Athena 850 include:

“The Athena is simple to control and extremely adaptable to difficult and undulating terrain and worksites, indoors and out,” Osborne maintains.

“Its structure has been designed to resist overload, with high-resistance steel lifting mechanisms.”