You are at:Home»All News»Management»WorkSafe launches ‘Be a Safe Guy’ campaign
October 31, 2018 Management 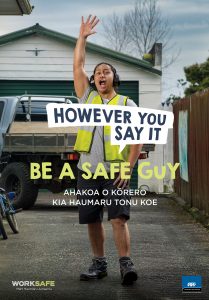 Since 2013, more than 40 workers between the age of 18 and 30 years old have lost their lives in the workplace.

The ‘Be a Safe Guy’ campaign has a particular focus on Māori male workers, who are at the greatest risk.

D’Angelo uses his style of humour to deliver a message that aims to remind everyone that there is no wrong way to say the right thing.

WorkSafe Strategy and Performance Manager Jude Urlich says that Stats NZ’s latest data shows that the rate of serious injury for Māori workers is 33% higher than for the total population.

“We also know that many Māori workers are in higher risk industries such as manufacturing, forestry, construction, agriculture, forestry, transport, postal and warehousing.

“Speaking up can be hard to do but we know that when workers get involved in health and safety that everyone benefits.”

Urlich says the new campaign recognises that one of the best ways people can stay safe is by talking to each other –in whatever way feels right for them.

As D’Angelo says, ‘However you say it, be a safe guy – ahakoa o korero, kia haumaru tonu koe’.”

The campaign will feature on videos, posters, billboards and radio adverts over the next four months.

D’Angelo Martin is a Māori comedian best known for his skits on his Tuturu Māori Facebook page, which started in May 2015 as a reflection of his reality.

His comedic style is all about identifying and impersonating different types of people.

His videos highlight different situations and the unique ways people deal with things.

Posters can be downloaded and videos can be shared here: