It’s no longer acceptable to take risks on the farm, a Rangitikei dairy farmer insists. 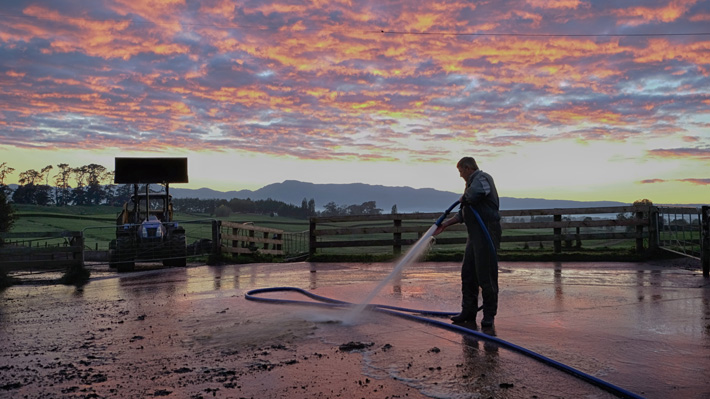 Stuart Taylor owns a 450-hectare dairy farm in the Lower Rangitikei, near Marton, with 1200 dairy cows.

He has six staff and has developed a robust health and safety policy, which they are all now actively engaged in.

A fifth-generation dairy farmer, Taylor grew up around farmers taking risks and when he graduated from university and began farming he took risks himself.

“When I was growing up, the onus for health and safety was 100 per cent on workers to keep themselves safe,” Taylor recalls.

“The general culture was that you should take a certain amount of risk to get the job done and that attitude still prevails among some farmers.

“There was also pressure to work if you were sick.

“Even if I had the flu, I was expected to work.

“Any physical or even mental health issue was not considered a valid reason not to be at work.”

However, Taylor was becoming increasingly aware that health and safety was not a priority on the farm and that could have potentially serious consequences for staff.

“These were bad habits with some potentially harmful consequences.

“Bikes and tractors weren’t being maintained as often as they should and I was pushing the team to take risks.

“Once I’d made the decision to change things, the next step was to figure out how to do that alongside the new changes to workplace health and safety laws.”

Taylor says that didn’t involve ploughing through the legislation – but instead learning about the ‘need to know’ parts of the act, through reading and talking to other people over time.

“We provided her with basic training around the requirements and she makes it her focus to consider health and safety in every interaction on the farm.

“You could say she has become our health and safety conscience.”

Health and safety is now a part of the weekly farm meetings, the farm hazards have been identified and a hazard register and maintenance record developed.

Near miss and incident reporting and staff and contractor inductions have also been introduced.

“We were also lucky that Neriah Broughton, the wife of one of our team members, has a background in IT and she developed a farm-specific health and safety app for us to use,” Taylor admits.

This enables farmers and workers to file hazard, near miss and incident reports from anywhere, using a smartphones or a tablet as well as tracking maintenance records and analysing safety trends.

The app, Tribal, has been made widely available and was a winner in the 2016 New Zealand Workplace Health and Safety Awards.

“That really helped, because you can file from the milking shed or a field, you don’t have to use paper or go back to the office,” Taylor notes.

Initially, he admits, there was some kickback from staff about the changes

“We did end up having to dismiss a couple of people for not wearing helmets and carrying on with unsafe practices, but now safety and wellness is just part and parcel of what we all do.”

It’s no longer acceptable to take a risk on this farm.

“If you are going to have to take a risk or break gear to get something done, then it’s okay not to complete that task or to tell someone to stop.”

“We have a policy ‘Call it if unsafe’ – and we’ve pinned that message up prominently around the farm.”

“When I was growing up all my farming uncles were taking risks.

“We’d tell stories of my great grandfather who fell off a haystack and got a pitchfork in his stomach but finished his work before walking to get help.”

That culture of seeing risk-taking as being stoic leads to unsafe behaviour, Taylor believes.

“Yes, we started out as immigrant pioneer farmers taking risks to break the land.

“But we aren’t pioneers any more.

“We have to start changing the stories about who we are as farmers.

“To succeed today we need to be professional and innovative and good health and safety practices are a major part of that.”

WorkSafe Sector Leader for Agriculture Al McCone says the unwritten rules of behaviour on farm are often contained in the stories being told about.

“People look to the boss to show leadership and in this case Stuart’s changes including the dismissals show he was serious.

“His recognition that changing the stories is key to normalising good practice is very important.”

The best outcomes are achieved when a business and its workers work together on health and safety.

On-farm health and safety outcomes will improve when:

This will help you and your business make better decisions – and keep your people and productivity thriving.

All businesses are required to have worker engagement and participation practices. How this is done depends on: