Plans for a redesigned Queenstown Convention Centre at Remarkables Park have been released.

Remarkables Park Limited revised their 2014 Queenstown Convention Centre resource consent application to significantly improve its location so that it could be positioned immediately across from the proposed Queenstown Gondola, and to enhance the design of the Centre.

The location in a new precinct at Remarkables Park, to be known as Remarkables Place, is on prime land with stunning water and Remarkables mountain views. It is also adjacent to the expansion of the Remarkables Park Town Centre and will share a generous public oval with the Base Station of the Queenstown Gondola.

“The revised Convention Centre design by architects Mason & Wales is contemporary and striking,” says Remarkables Park Limited CEO Alastair Porter. “It draws The Remarkables mountains into the facility through tall floor to ceiling glass panels, and from the outside the glass will provide a dramatic reflection of the mountains.”

The facility is designed so it can be built in stages to match demand. Stage I, with a total area of 2,560m², can accommodate various configurations. It will be large enough to accommodate 700 plenary delegates and 500 banqueting in adjacent areas of the main hall, without the need to breakdown and re-set between day and night functions.

When used for conferencing alone the main hall will have capacity for up to 1,400 delegates. The facility includes a separate foyer and exhibition spaces, both of which would be ideal for cocktail receptions or smaller functions.

Stage II would enable all capacities to increase by more than 60 per cent, plus more breakout spaces, still leaving room on the site for further expansion in the future.

The appeal and functionality of the Queenstown Convention Centre will be further enhanced by two adjacent ovals that will be wired for outside activities and could be covered for very large events or performances.

Porter says in terms of delegate accommodation Remarkables Park was the largest greenfield area zoned for new hotels in Queenstown. The first of those hotels, the Ramada Hotel & Suites Remarkables Park, will open in June and there are more hotels to come. “The Centre is designed to be cost-effective to build, with the first stage estimated to cost $25m – $35m, excluding Remarkables Park Ltd’s land contribution.”

The company expects the centre to appeal strongly to conference organisers in terms of its iconic views, convenient location, close proximity to hotels and retail, and for its ability to leverage the Queenstown Gondola to access both Queenstown Park Station and the striking new large NZSki base building on The Remarkables, which will also be able to host conference activities in late spring, summer and autumn.

“Now we’ve resolved our location and design, the next stage is presenting our revised plans to the design review board and going through the resource consent process,” Porter advises. “Since Remarkables Park’s zoning already includes conference facilities we anticipate this will be non-notified.”

The company is also working on ownership and operating struct 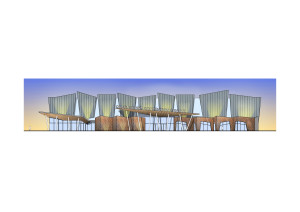 ures. “This could be a private consortium including Remarkables Park, sponsors and hotels, but we would be open to it being a Public Private Partnership project,” Porter confides, enabling public investment to work together with private enterprise.

“We’re actively seeking interest from hotels interested in waterview locations in close proximity to the Queenstown Convention Centre and Gondola as part of the development of the Centre.”

Consent will be ready for submission in a matter of weeks, with an answer possible by the third quarter of 2016, meaning a consortium could potentially open the centre in 2018.