A campaign to raise public awareness about life threatening severe bleeding after an accident has been launched today by New Zealand healthcare company Pharmaco Emergency Care, and is being supported by the Medical Director for St John 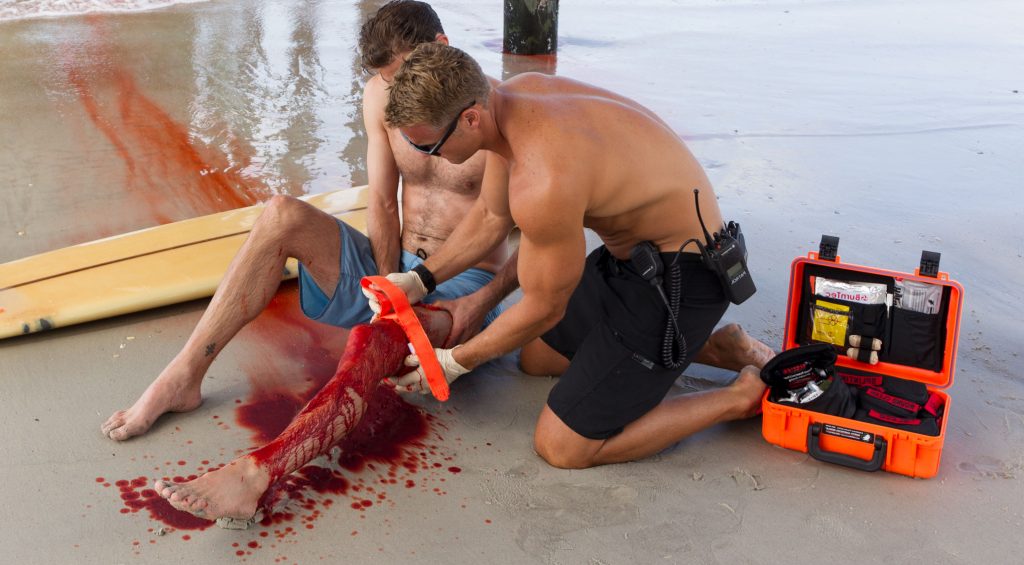 Stop the Bleed New Zealand aims to educate people about how to best manage a major bleed in the critical minutes before emergency services are able to arrive. A cut artery can result in death in as little as three minutes and in this time precious lives can be lost if immediate first aid is not provided.

The campaign reflects a growing understanding that dealing with major external bleeding is vital when a person has immediate life-threatening injuries.

Pip Cotterell, Product and Critical Standards Manager, at Pharmaco Emergency Care, says it’s essential the public have the right training and tools to manage a situation with potentially tragic results:

“This is all about getting priorities right in a life-threatening situation – people dying from loss of blood is tragic, but what’s more heartbreaking is people not knowing how to save them.

“There are many common accidents that can result in major bleeding such as kids crashing through windows at home, to fishing and boating accidents, work or DIY machinery, road and even hunting accidents.

“And Kiwi lives are lost every year simply because people are unaware of what to do to stop the bleed for long enough to save a person’s life.

“We are talking about major bleeding when blood is spurting or pouring from a wound as the heart pumps. With an average of only 5 litres of blood in our bodies, bleeding like this can lead to death very quickly. It’s traumatic and highly stressful, so people need to understand what steps to take straight away.”

The Stop the Bleed NZ campaign has been planned since last year to raise awareness that injury and major bleeding can occur unexpectedly anytime and it’s important to be prepared to manage it.

It follows in the footsteps of other successful initiatives in the US and Australia, where training programmes exist, including how to use a high quality tourniquet, a band placed around a limb that is tightened to control bleeding by stopping blood flow to a wound.

Dr Tony Smith, Medical Director of St John, says New Zealand is taking the lead from these countries and welcomes a focus on how to provide first aid for major bleeding:

“If someone severs an artery the fastest ambulance or helicopter isn’t always going to get there in time to save their life – however, anyone can help save that person’s life and nine times out of ten it will be someone you know, a colleague, friend or loved one.

“We see accidents where someone could have been saved if the bleeding had been controlled, but people need the knowledge and ideally the right equipment nearby, such as in a vehicle or building.

“We don’t have New Zealand stats but international ones show that up to 20% of people who have died from injuries could have survived with quick bleeding control1 and unfortunately every year we see deaths that were preventable had people stopped the external bleeding.

“In a nutshell, the key is putting full body-weight pressure on the wound to stem the blood flow and doing this for as long as possible – that’s why we say “Push Hard, Don’t Stop”.

“The two mistakes people make are not applying enough pressure, and not pressing for long enough. Use a bandage, item of clothing or a cloth to push hard on the wound and keep pushing.”

Currently, the use of tourniquets is not routinely included in first aid training in New Zealand but this is being reviewed: “this change has happened overseas and it is something we are discussing in New Zealand,” he says.

Over the next year Stop the Bleed New Zealand aims to grow the knowledge about bleeding control and raise public awareness about the key steps to take.