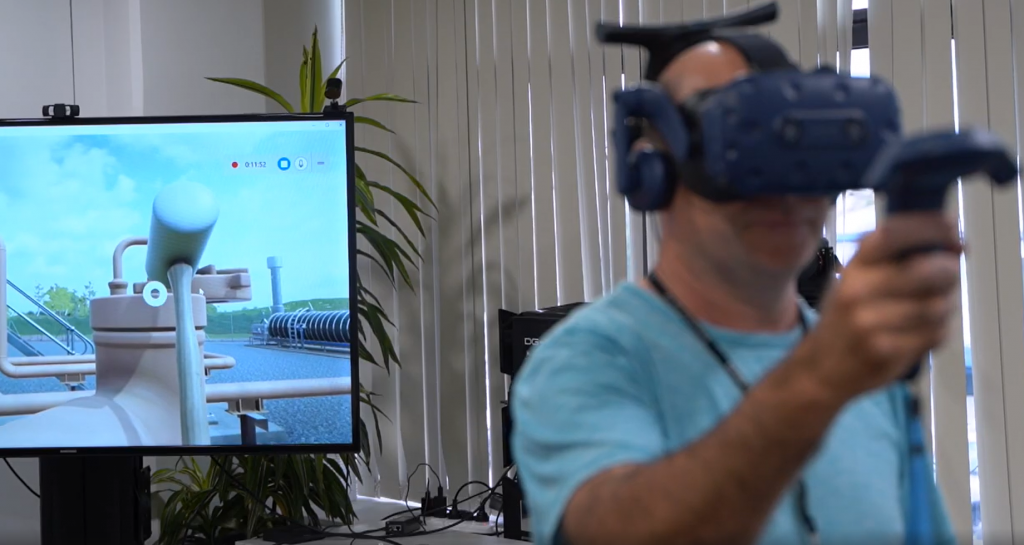 The minimum viable product took 12 weeks to design and develop, with Uncles receiving weekly updates from Prasad and his team.

“It’s amazing what they could get achieved in that short time,” Uncles said.

“There was a real sense of keenness to deliver something that did what we expected and ticked all the boxes.”

Company-X used cutting-edge VR technology to replicate, in exacting detail, the high-risk procedure for emergency venting of a ruptured pipeline before maintenance could be carried out.

“The First Gas project team was delighted to work with Company-X and found their approach to the project to be well thought out, which in turn made it easy for us to know what was required from us, and what their project team was responsible for,” Uncles said.

“Throughout the project we were impressed with the communication, documentation and continuous progress updates provided by their project team. The project management was well delivered with detailed updates leaving us confident the project was always controlled and would be delivered on schedule.”

A demonstration day in Bell Block, Taranaki was popular with the First Gas team.

“The reactions of people who tried the VR headset in the FirstGas VR Training scenario conveyed a sense of amazement, as they explored the environment and interacted with the valves, control panel button and the tools,” Uncles said.

“There were no reports of dizziness, motion sickness, nausea or any other ill-feeling as can be attributed to older VR technology. The consensus was that it was a very realistic life-like world with ‘good effects’, that makes for a viable training environment.

Company-X developed many reusable artefacts in the process which FirstGas can use in future VR training scenarios.

Future projects and scenarios are limited only by the imagination and ideas of the people within First Gas,” Uncles said.

“They provide an engaging, fun and cost-effective way of exposing our people to what would normally be a high-risk task.”

“The delivered products possessed the ‘wow’ factor we wanted to show that training for high-risk activities can now be virtualised in a fun and engaging manner, removing almost all risk to our people and assets in a cost-effective manner.”

The team has grown to more than 50 New Zealand-based software specialists, with only the best and brightest passing our interview and assessment process. The Company-X team prides itself with experience in a wide range of technologies and languages and loves challenging problems.

Company-X ranked on the Deloitte Technology Fast 500™ Asia Pacific, a list of the fastest  growing technology companies in Asia Pacific, in 2017, 2018 and 2019.