You are at:Home»All News»Training»Health and safety sentencing emphasises the importance of training
April 20, 2018 Training

A recent health and safety sentencing decision from the District Court, WorkSafe New Zealand v Avon Industries Ltd [2018] NZDC 4766, has highlighted how critical the proper training of workers can be in a workplace, Duncan Cotterill advises 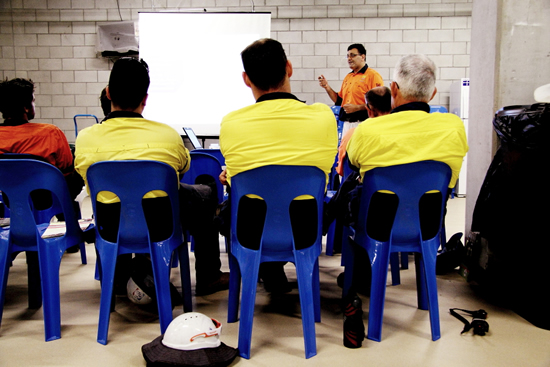 In particular, just correcting bad practices and dangerous behaviour isn’t enough – instead training should be provided to ensure that every worker knows the correct procedures to follow, the leading law firm insists.

Avon Industries Ltd carries out the galvanising of lengths of chain, a process which involves the chain being dipped into a bath of molten zinc, at a temperature of between 450 and 460 degrees celsius.

The chain is fed through the bath on wheels.

The court noted that:

“the zinc is largely uncovered. There is an obvious risk of workers being splashed by the zinc during the process and they wear protective clothing to guard them from injury. It was common ground at the hearing that the nature of the process meant that it was difficult to guard workers from injury through splashing by any mechanical means, such as shields or screens.”

When the incident occurred, the chain had become jammed in the wheel feeding the chain in to the zinc.

The supervisor, Mr Volkner, climbed on to the frame of the machine to free the chain, and slipped.

His foot went in to the zinc bath, and although he was wearing protective gear, molten zinc poured over the top of Volkner’s safety boot.

He suffered deep burns and had to undergo a skin graft, spending 21 days in hospital.

The evidence showed that Volkner had climbed on the machine in a similar way the previous week, and was “told off” for doing so by his immediate supervisor.

The managing director of Avon Industries was not told of the earlier incident, but the fact that it was seen by a supervisor means that the company had knowledge of the behaviour.

WorkSafe asserted, and Judge Orchard agreed, that the supervisor’s actions in telling him off were insufficient, and given the risk involved, the matter should have been escalated to ensure that there was:

Judge Orchard spent some time considering the level of culpability of Avon Industries.

In this case, Judge Orchard decided that the level of culpability in this case was in the medium to high bracket.

“The more difficult it is to guard against a risk by mechanical means the more important it becomes to guard against it by such means as training, supervision, monitoring and discipline. This is particularly so where the potential for death and/or serious (not to say excruciatingly painful) injury is great. The acknowledged failure in these areas is consequently particularly culpable.”