Two different species of exotic fruit flies have been found in Auckland in the past week, posing a risk to New Zealand’s horticulture industry and the threat is unlikely to disappear, says Lincoln University’s Dr Karen Armstrong 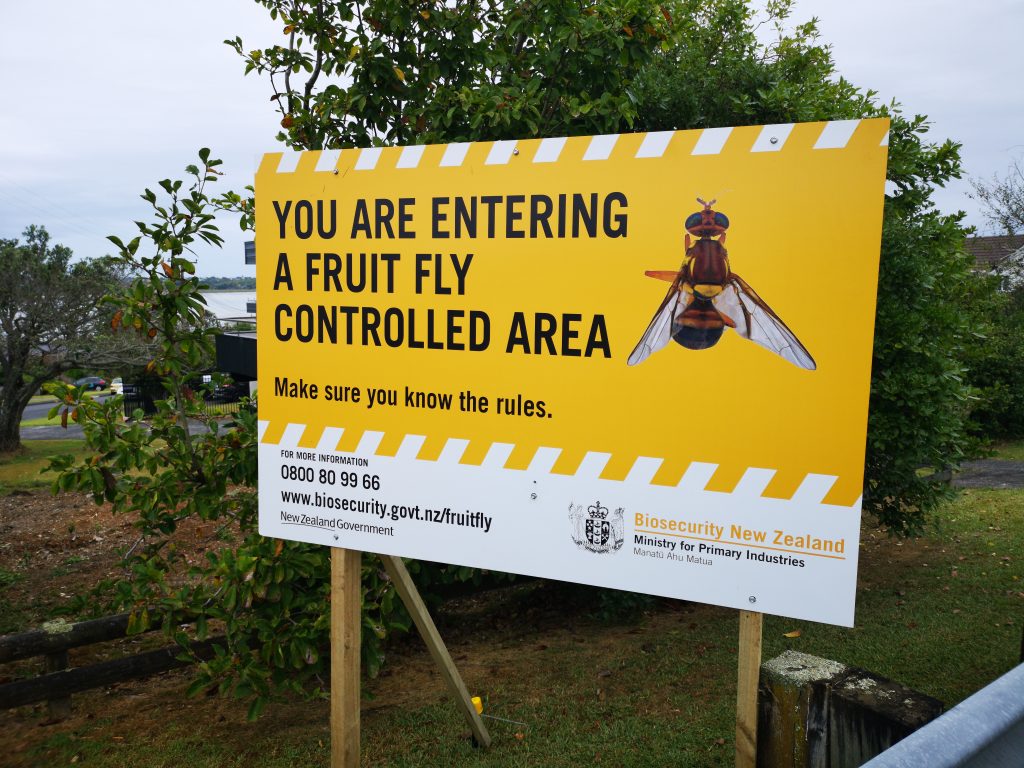 The Queensland fruit fly has so far been detected five times in the upper North Island in the past decade.  We will inevitably see more Queensland fruit flies arrive in New Zealand. This won’t necessarily be more frequently, unless their numbers in SE Australia erupt, but the threat will not disappear.

Regardless of the relatively extensive pre-, at- and post-border systems in place, it’s impossible to secure New Zealand against this pest which can go undetected inside a piece of fruit, and enter the country through many different routes.

Crops most at risk from the fruit fly

The Queensland fruit fly has been described as one of the biggest threats to New Zealand horticulture. This species is a generalist, with a vast range of fruit that it can develop on and damage. The fruits most likely to be attacked after initial introduction will depend on what is available close to where the first adults emerge.

But some hosts for Queensland fruit fly are better than others. From a New Zealand commercial perspective apples might be at most risk. Second only in export value to kiwifruit (NZD 1.7 billion), apples (NZD 0.7 billion) are a preferred host. As well as damaging the fruit this species is able to develop well in the fruit and the pest numbers can easily grow. Similarly at risk are citrus, stone fruit, pears, berries and avocado crops.

Kiwifruit and grapes for wine, on the other hand, are not known elsewhere as preferred hosts for the Queensland fruit fly. They can be attacked but the flies develop poorly such that the numbers are unlikely to proliferate as they do with apples. For example, in grapes overseas, significant fruit damage is only seen when Queensland fruit fly numbers are extremely high. Therefore these crops in New Zealand, because of their high export value, may be the impacted largely by loss of market access and management restrictions.

Following the initial discovery of a Queensland fruit fly in Devonport, a facialis fruit fly was found in Ōtara. The horticultural industry should not be more worried than they will already be for the Queensland fruit fly. Fruit fly reaching New Zealand is inevitable, and this is that time of year.

But with the pre- and at-border systems we have in place, the number getting here is substantially less than it would otherwise be. With the experience we have and world-class surveillance and response systems in place, we stand a high chance of preventing establishment of these pests, as we have before.

This second species is a significant economic pest in its home range, confined to Tonga. It has been intercepted in New Zealand before. But, in our favour, it does not show the same invasive tendency like the Queensland, Mediterranean and Oriental fruit flies or have as broad a host range, although its hosts do include citrus, peach, capsicum, mango and avocado. The climate in south Auckland will not be as favourable as it is in Tonga.

If there are other potentially damaging exotic species here, as yet undetected, it would be hard to know until they became an obvious problem. And for fruit flies that clearly hasn’t been the case. Detections and eradications have always been successful.

New Zealand and Chile are the only major horticultural producing countries in the world that are free from fruit fly species that attack commercial fruit.

Therefore, no matter which type of fruit the fly was shown to be established on, New Zealand would lose its pest-free status.

In the immediate term, our biggest fresh fruit exports of kiwifruit and apples, and others such as cherries, avocados and capsicum, could be locked out of trade for a period with their largest markets in Asia, the Americas and Europe until eradication was proven. These regions do not have this fruit fly species which would put their own fruit industries at risk.

The worst-case scenario would be if eradication was not possible. New Zealand’s standing on the global fresh fruit market would be severely undermined, and our competitive advantage and premium returns eroded through pre-export treatments and loss of fruit quality. Excluding wine exports (NZD 1.7 billion), horticulture is New Zealand’s fourth largest export industry (NZD 2.2 billion, ~6 per cent of total exports), and 80 per cent of our fruit crops are vulnerable to attack. Fruit for processing would also be impacted by production loss and pest management measures.

For the home gardener keen on their own fruit, there would be the inconvenience and cost of monitoring with traps and increased use of pesticides, bringing additional environmental and health impacts.

It is not likely that commercial fruit would be a source. Australian fruit exporters adhere to strict import health standards, and their continued trade with New Zealand is dependent on fruit fly-free fruit.

Compliance by visitors to New Zealand, on the other hand, depends on how well we get the message out that fruit fly introduced to New Zealand would have serious economic consequences for the country. The major airports are fairly well managed in that regard. But, for example, it is more difficult to monitor visitors arriving on yachts or cruise ships bringing fruit that they may have bought in Australian or Pacific Island markets.

Why the upper North Island is at risk

Greater number of interceptions in the North Island is likely because of the greater number of people arriving into Auckland from Australia and the Pacific, compared with South Island ports.

However, the consistently warmer temperature and higher humidity in the North Island will also encourage completion of the flies’ life cycle. So eggs or larvae that arrive in fruit are more likely to reach the adult stage. This is the life stage that our year-round trapping system detects. And, of course, these are also the conditions that suit growth of backyard fruit, which provides convenient and available host material for much of the year.

Conversely, even if infested fruit is introduced to the South Island, the cooler, dryer conditions of the east coast where the major ports are mean the flies may never emerge. For the same reasons availability of backyard host fruit material is less.

Climate warming has been predicted to change this, such that the east coast of the South Island would provide more suitable temperatures for the Queensland fruit fly to develop.

Information is key. Getting this out to travellers as they enter the country, explaining what to look for and why, and making it easy to mitigate the risk, such as with fruit amnesty bins at the airports, encourage visitors to understand the importance to this country and to comply. But as a backup, fruit detector dogs and X-rays are used for flights and passengers coming from high-risk places such as Queensland and the Pacific.

Importers of fresh fruit, on the other hand, have a clear and strict import health standard to work with. This includes pre-export inspections and disinfestation treatments, such as keeping the fruit in the cold for a period of time, or low-level irradiation for others such as mangoes. During transit, the produce must be contained in a way that makes it impossible for the fruit to become infested, and once it arrives in New Zealand it’s transported directly to an approved inspection facility for final clearance.

Infested fruit are difficult to distinguish from clean fruit until they’re cut or eaten. Therefore moving fruit around increases the risk that adults may emerge in a different place to where the original infestation was introduced.

This helps the pest spread. But it also makes it harder for authorities to contain and understand the likely distribution of the fly, which is essential for successful eradication.

The result of not being able to contain fruit to the original area will be geographically wider and longer disruption to the public, small businesses and growers while an eradication programme is in place.”

Other biosecurity threats to horticulture in New Zealand

Besides the many other damaging fruit flies, such as the Mediterranean and Oriental fruit flies, there is the hitchhiker pest brown marmorated stink bug. This has a large, indiscriminate range of fruit that it feeds on. But in autumn, when they seek shelter to overwinter, they become a severe urban pest, aggregating in the thousands and invading crevices in houses.

Drosophila suzukii, the spotted wing drosophila, looks like the small fly you find around ripe fruit in your fruit bowl. But this species is unusual in that it attacks ripening fruit before harvest. It attacks a wide range of crops, including grape. Endemic to Asia, it has recently shown a disturbing invasive movement into the temperate regions of the USA and Europe.

The spotted lanternfly, another species endemic to Asia, is an emerging pest of pip fruit, stone fruit, kiwifruit, and grapes. It has only recently invaded the USA where its numbers have grown rapidly. Also, a hitchhiker that is difficult to detect, it is difficult to control with pesticides.

The kanzawa spider mite and serpentine leafminer have also been on watch lists for a while with potentially significant economic impacts on New Zealand’s horticultural industry.